Paris is burning (up)

- "It just doesn't feel safe to even eat a baguette around here anymore. This line is ridiculous. Everyone is huddled on my back, snooping all over me. Stop staring at my cellphone please! Gimme a lil privacy man. Back off! " urged Jane Publique coughing up an American contraband Milky Way bar. THE WORLD is so angry right now."

- "No monseir, Le Monde is angry" mumbled a local gypsy who was approaching the line to beg.

A pale blonde little Scandinavian girl stormed out of a Roma tented street campground and stood on top of a bench in front of the tourists holding up a newspaper with her face on the cover of it and screaming for the police in some unintelligible ramble.

The gypsy tore the paper from the girl's hand and began reaching out for change, begging to be heard in broken English...

- "This paper called Le Monde, which I am too busy to read and too culturally incompetent to understand, is making strong claims today my fine people. Buy this from me. I'll sell it to ya for only one American dollar. Le Monde, and this region, are demanding answers about a recent discovery of U.S. interception of phone calls and violations of French citizens privacy. These claims even disturb folks like me who cannot afford a mobile. The paper was founded after the German's were driven from Paris during WW2  after the "occupation." THE WORLD is reportedly demanding answers. Even Germans are livid. It's "SNOWING" (i.e. SNOWDEN-ING) in Paris and world climate change is heating up a storm.

A middle-age female Greek tourist(?) with frizzy unkempt hair cuts in front of the sewer tour waiting line, pushing the gypsy to the ground.

- " Excuse me. I apologize. I'm a diabetic. My husband is an experimental filmmaker and found this sewer tour site fascinating. You are able to see how the sewage is handled. I found the historical displays and explanations of the development of the system more interesting than this local gossip news you're blabbing about. Victor Hugo had a relationship with officials of the system which makes Les Miserables more understandable. Does anyone wanna buy my bootleg DVD? Wolverine stars in it! The only problem is that it won't work on your Euro players. It's not PAL formatted. And my husband hates Hollywood crap and wants the movie out of our tent. Anyone wanna stop bitchin' and take it out of our hands ? Going once.. going twice...go to hell. No one wants it, then I'll just leave it down there in the sewer with the rest of your sh%T. "

She screams at the little blonde girl. The child screams back at her, shivering nervous. A Russian tourist gives the child a T-shirt to keep warm that reads, 'I came to Paris as a patriot, and all I bought back to the U.S. was this lousy T-shirt.'

- "Don't talk or take things from strangers sweetheart. C'mon honey! Come to your Mommy. Let's get outta here before things really heat up. You got a big mouth kid. I'm guessing that you take after your mother. Bye everybody. And Paris sucks! Too many nosey damn tourists and no Falafels.  Oh Sh*t,  MALAKAS!!!'

Paris police sirens are heard at a distance. 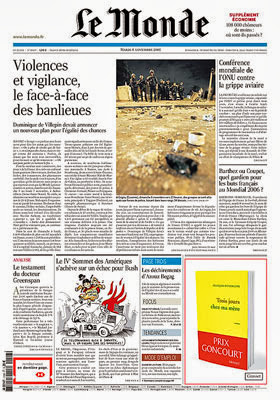 © 2013 Artists Rights Society (ARS).
Any unauthorized commercial use of materials is strictly prohibited.
Copyright © 2013.
Posted by jane public at 4:40 AM