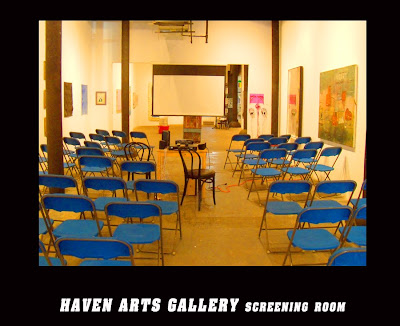 The SOUTH BRONX FILM FESTIVAL far surpassed my expectations. It was REALLY good. Not only did I leave a PROUD Bronx born person, I left learning more about my work, and the effect it has upon other people.

The film fest screened, LEN. My screening generated some very informative dialogues, with the usual combination of those who "believed" and "wanted to believe" the tragic story narrative I had created. I have had such a difficult time with this important film of mine due to the fact that it was used against me in a trial to hurt me. A film, like some of my others, that came back to personally attack and haunt me. There is a distance now, a creative one, and I was able to speak of the film and it's process, without the caution I had experienced before. I continue to get the overall appreciation for the "look" of the film, it's gritty 16mm black & white style, it's misunderstood horror. Other comments really made me appreciate the experience of having to "go back in time" and recall why I did some of the things that I did. Here are some sample questions that I received:

1) Did you film the story in a linear fashion? There are essentially 5 questions asked in this interview with the perpetrator. Were they designed to be a "build up" to this character's "resolution", or did you construct the interview-story-drama in the editing process Out of Sequence? ( the question was asked due to the fact that the actor appeared to be getting better and better at his "denial" as the film progressed).

2) How did you set up the Lighting? (the question was asked due to the pulsating effect. This effect occurred since the lights were blasted up at the apartment cieling fan).

3) Your "personal situation" due to he misinterpretation of the film, and the LEN character's situation ended up being so close in detail. Would you ever consider making a film about how THIS particular film actually came back to attack you, the filmmaker, in a trial and forensic evaluation setting? (the question was posed because the person felt that it added a whole new layer and dimension to the mysterious "reality" the film has despite it's complete falsehood).


OVERALL, I made some good contacts due to this film screening at this New York festival. I think that finally LEN has come back to make peace with me. Thank God almighty. I will embrace anything good that comes outta the effects of this film upon others, and as usual, hide it away under LOCK AND KEY, after any film festival is done and finished with it. (i.e. right now. I locked Mr. LEN up and away. and it's time to get to the next film to show).

NOTE: I was told that the gallery that showed my work has FREE model drawing once a week for artists. I will begin to participate in NUDE Model Drawing on Thursdays. Number one: It's free. Number two: I'm thinking I may find the next victim to make a star in a new joey film. Why not try something new and that ain't using CRAIGS LIST as a means for casting. Let's see how that confessional narrative goes. No clothes. No script. No clue. Time will tell. 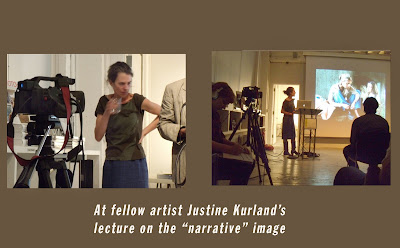 I saw Justine at APERTURE GALLERY down on 47th street. Awesome lecture. It's just so interesting to see a hippie fight so hard against "hippiedom". I keep telling her that it's not her fault, IT'S HER MOM's! (her mother is the ultimate commune livin' nudist hippie). Justine lives in her van, with her 4 year old kid, so ya gotta give credit where credit is due! She rules. Point Blank.

Anyways, all friendship aside, she is an incredible talent. Her work IS narrative driven (the unfortunate new hype), BUT is SO focused and enamored by the nature "LANDSCAPE" there is always something unruly and unstaged about every single thing that she does.

I had needed inspiration today and I got it by seeing her work and hearing her process. She not just loves what she does, she needs to do what she does. She needs to take and make images. I needed to be reminded that I am not the only lunatic in the world who needs to do this kind of thing with my life.