Make room for the 'Room' with no germs.

The film, 'Room' has been nominated for award/s and it stands worthy of such. 'Room' is not the greatest film in the world regarding aesthetics, performance and writing - but thematically it's such an important movie. The film reminded me, very much, of the amazing 80's sleeper (and much forgotten) film, 'Without a Trace.' As difficult as this subject matter can be, it is an extremely important and timely subject matter. Films like this instigate immediate dialogues regarding contemporary laws, national awareness and universal precautions that can save lives. I don't think that this particular film deserves any big major win, but if it does go away taking a trophy- it will be an earned one. Strong stuff- especially the rug truck scene. Suspense as nerve racking as any classic Hitchcock escape moment. In blogging conclusion, these films gain their greatest power when we are able to depart the cinematic experience and fathom just how many people have never been found and will never be able to successfully get out of their rooms. The irony of this film's depiction of trauma is that the room that had brought them so much hell was the one single place that taught them how to love one another. bye. 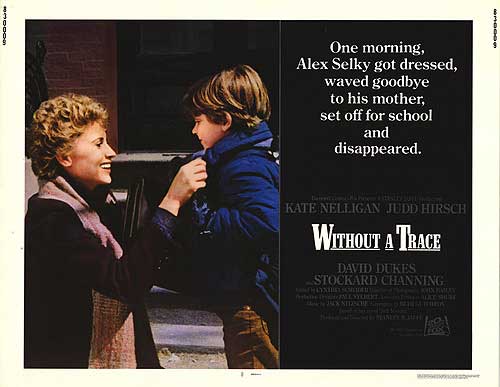 btw - this film 'Without a Trace' is basically impossible to find these days. Only exists now on VHS.