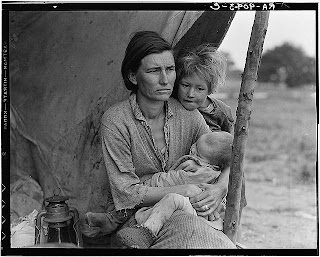 At the height of the DEPRESSION, when economic statistics were untrustworthy, pictures provided the best description of American suffering (and the ONLY one available to the illiterate). Comminsioned by the NEW DEAL, teams of cameramen roamed the country documenting the nation's woe, and when their work appeared in magazines and newspapers, it shocked viewers into an outpouring of sympathy (and, in turn, helped garner support for FDR's relief programs). One photographer in particular, showing a female migrant worker with her young children, so moved viewers it became the nationally recognized symbol of the era's misery.
Among the places of NEW DEAL pictures appeared was a fresh new photo magazine called, LIFE. Started in 1936 by Henry Luce, the founder of TIME.
People like LIFE because it showed them pictures not only of major news events but of everyday moments as well (an early issue featured a photo essay called "Birth of a Baby"). The magazine had the quality of a community journal as readers opened it each week to find stories about people as ordinary as themselves.
In order to support and defend its aids programs, the Farm Security Administration (FSA) sent photographers like Lange and Marion Post Wolcott into rural America to document life in the 1930's.
Dorothea Lange inspires me to keep moving foward and doing.
CLICK ON THESE LINKS FOR MORE IMAGES OF HER EXTRAORDINARY WORK... http://www.historyplace.com/unitedstates/lange/index.html
http://www.loc.gov/rr/print/list/128_migm.html
love,
me
xo
Posted by jane public at 7:05 AM