Once Upon a Time in Predictability.

The Best Director Oscar nomination announcements made this morning are pretty sad, but predictable. The palliative Hollywood industry have been so ever dying (pun intended) to give the grand prize to hack Tarantino, it’s sickening. The dinosaurs in charge remain desperately in love with Quentin’s obnoxious refusal to adapt to the new world of digital cinema. ‘Once Upon a Time...’ is worthy of Best Cinematography and even Production Design. But directing - no. The ending of the movie is the same nonsense he always does- infantile overkill. The reason that he keeps yapping that he’s only going to make 10 movies in his life is because he’s not a true film artist and has no desire to keep doing movies. He’s a video store clerk movie buff who’s having fun casting celebrities in big budget remakes of all of his favorite B movies and drive-in trailers. Upsetting.  But, whatever.  Oscar night will be cool to see particularly who wins Best Supporting Male and Female roles. Looking foward!
P.S. I’m rooting for Pitt for Best Supporting, despite Joe Pesci emerging from his retirement like the epic New Jersey kingpin Don that he is. 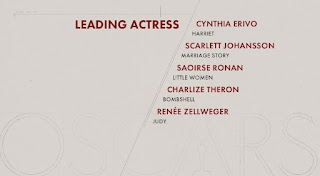 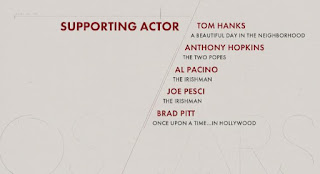